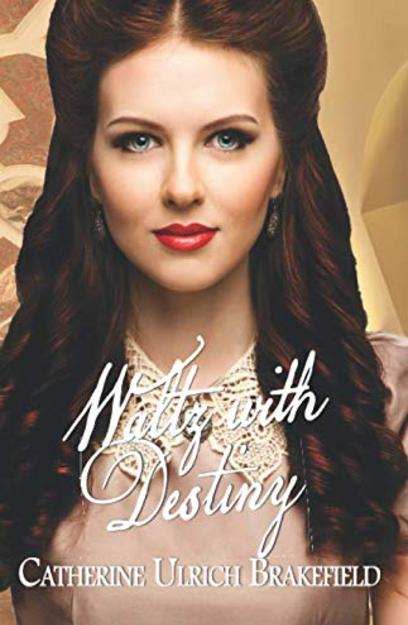 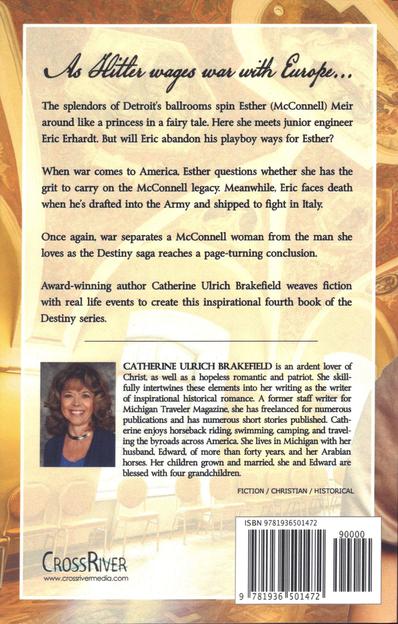 Linda Smith
5.0 out of 5 stars"Waltz with Destiny" - Another 5 star achievement by an amazing author, Catherine Ulrich Brakefield
July 18, 2019

“The sound of the wounded soldier’s voice echoed in the stillness. Eric spat. “Dear God, what do you want me to do?” A breeze blew across his face……”Cover me with Your armor Lord“...”I am out of ammo and on my last grenade!!!....
“If the Lord willed, he’d get home. He didn’t want Esther to love him, not until he returned”.
But would he return? Was this God’s plan for his life? Would Esther’s brother, badly injured, and burning with fever make it off the battlefield? Would Esther fall to a flirtatious man? Or would she finally settle for Thomas, a polite southerner?
Catherine Ulrich Brakefield captivates her audience from beginning to end with her eloquent style, her attention to detail in the lives of her characters and her knowledge of historical events during WWII. It was as if she were on the battlefield herself! Her lead characters had faith, strength, and a love for the Lord.
Catherine’s meticulous attention to detail in this story, taking place in Detroit in the 1940’s, brings her readers a plethora of emotions as she carefully draws you into the lives of her characters. Love, passion, pain, sorrow, joy, relief, anticipation, fear, bitterness, forgiveness, faith in God, it is all there just waiting to be enjoyed by her readers. Bravo Cathy, once again you have the innate ability to write even better than your best! How do you do it?

Debra Allard
5.0 out of 5 stars An exciting historical romance teeming with suspense.
May 24, 2019

This forth book in the "Destiny Series" was exciting, to say the least. Brakefield weaves a rocky romance between Esther Meir and playboy Eric Erhardt with plenty of twists and turns. I read through the night, unable to put the book down, especially after Eric enlists in the Army and repeatedly faces death in the trenches of WWII. I kept wondering if he would survive and if he and Esther would ever be reunited. I love Brakefield's vivid writing which keeps the book unfolding like a big screen movie. I highly recommend the book to anyone who enjoys history, romance, or suspense.

Little Hen
5.0 out of 5 stars History Worth Remembering and Characters That Bring it to Life
June 3, 2019

Catherine Ulrich Brakefield’s Waltz with Destiny is the crown jewel of the Destiny series!
Brakefield brings 1940s Detroit to life, along with the WWII battlefields of Italy.

Esther Meier, daughter of Ruby (McConnell) Meier, has a legacy of faith to live up to and an unsure future with war looming and her annoying attraction to a man who seems to flirt with every girl who glances sideways at him.

Eric Erhardt is studying to be an engineer but also wants to win his father’s approval. Handsome and talented, he can’t see it in himself. When he meets Esther at the Vanity Ballroom, he finds there’s something different about her with her faith and the way she conducts herself. She captures his heart like no other girl. Though love grows between them, both are afraid to admit it and commit themselves to the relationship, especially with the war in full swing.

Brakefield has outdone herself in bringing to life battles of WWII as seen through Eric’s eyes: the angst, fear, deprivation, bravery, death, and injury that surrounded the men of the United States Army. It’s a good read to remind us of the sacrifices of those that have gone before us that have maintained our freedom at sobering cost, along with God’s grace and answered prayer.

Yet Esther is never far from Eric’s thoughts while he is away. And while she is faithful to write encouraging words to him she wonders … should she wait for him? It’s worth reading to find out! You won’t want to put this one down!

I was given a copy of this book for my honest review.
Catherine paints a vivid picture of American in wartime in Waltz Into Destiny. The author wove her father’s eye-witness account of the Italian front during World War II into the story showing readers a deep viewpoint of life on the battlefield. The love story of Eric and Esther is full of faith and old fashion values. The battle scenes are realistic, and the home front scenes are believable. The characters make mistakes we can all relate too. A wonderful history comes alive story.

Historical romance fans will want to check out Waltz with Destiny. This last book in the Destiny series delivers history and romance, but not romance neatly tied up with a bow. Brakefield's characters live through tough times and grim realities of World War II, plus other challenges before they can find their destiny.

This is not your average romance. It does have its romantic parts, however the battle scenes at Monte Cassino (Italy) was so realistic you felt like you were part of the battle. You get to know each personality as if you were their friend. It was a book that is hard to put down because you can't wait to find out what will happen next. A great read

Click above to watch
Waltz with Destiny
Book Trailer